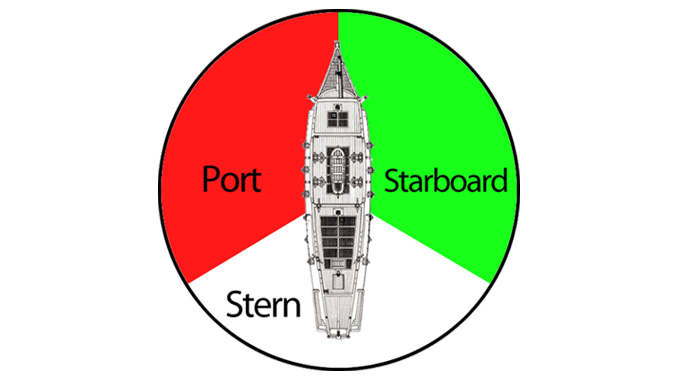 As port and starboard never change, they are unambiguous references that are independent of a mariner’s orientation, and, as a result, mariners use these nautical terms instead of left and right to avoid confusion.

Have you ever wondered why sailors use the terms ‘port’ and ‘starboard’, instead of left and right side on ships?

In the past, ships used to have rudders on their centre line and they were controlled using a steering oar. As it is the case today, back then as well the majority of the people were right handed.

Thus, as most of the sailors were right handed, the steering oar used to control the ship was located over or through the right side of the stern.

For this reason, most of the seafarers were calling the right side as the ‘steering side’, which later was known as ‘starboard’.

The word ‘starboard’ is the combination of two old words: stéor (meaning ‘steer’) and bord (meaning ‘the side of a boat’).

The left side is called ‘port’ because ships with steerboards or star boards would dock at ports on the opposite side of the steerboard or star.

Another reason why the left side is ‘port’ is because it sounds different from ‘starboard’. Originally, sailors were calling the left side ‘larboard’, which was easily confused with ‘starboard’, especially when challenging conditions at sea made it difficult to hear. The switch was done to lead to a distinctive alternate name.

Namely, the old English name for the port side sounded like ‘backboard’. On big vessels, the sailor using the steering would have his back facing the ship’s left side.

As a result, ‘backboard’was named ‘laddebord’, which is the loading side of the ship. Later, ‘laddebord’ became ‘larboard’, causing the confusion that led to change to port.

This is why ships are using the terms ‘port’ and ‘starboard’, as they are unambiguous references that are independent of a mariner’s orientation.

With these terms, seafarers remove ambiguity, and they prefer them over using the terms left and right.